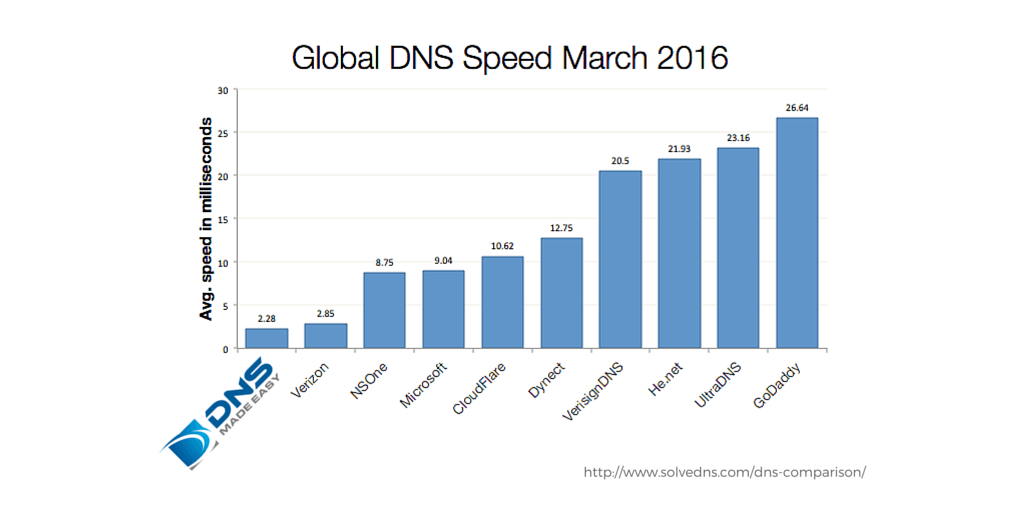 Congratulations for choosing the fastest DNS provider in the world! We’re excited to announce that SolveDNS, a third party network research firm, has ranked us #1 in the world for DNS lookup speeds.

As a result of recent network expansions to the DNS Made Easy network, the hard work has paid off to the tune of a number one ranking in the world for DNS lookup speeds. SolveDNS, a third party network research firm, ranks the top DNS providers every month based on DNS lookup speeds.

According to SolveDNS.com, DNS lookup speeds are calculated by averaging millions of lookups across seven different locations. In addition to achieving the number one rank in speed for the month of March 2016, DNS Made Easy also ranked third for market share, hosting over 900,000 domains.

“We put the majority of our revenue back into our network, so we can continually serve not just the fastest, but the best enterprise-level DNS services,” says President of DNS Made Easy Steven Job.

DNS Made Easy recently underwent a series of expansions; most notably two new points of presence were established in Singapore and Amsterdam. The engineers also began new partnerships with top tier data providers like TeliaSonera and Telstra. Most recently, DNS Made Easy conducted their quarterly evaluation of their network and made new implementations to improve security in several regions.

The DNS Made Easy network is able to provide such fast speeds across the world due to their use of proprietary IP Anycast + technology. The network is spread over 16 different geographically unique locations around the world, each at premier data facilities.

“We regularly revamp our PoPs to ensure that we are only partnering with the fastest and most reliable providers. This is foundational to our commitment to providing the best performing DNS services,” says Job.

Speed is only one part of the DNS performance equation. In order to be the best performing provider, one must also have an exceptional uptime history, a secure backbone, and innovative features. In addition to being the fastest provider, DNS Made Easy’s network is also renowned as being the most reliable in the industry with a 100% uptime history for 13 years.

To learn more about the recent expansions, the full report is available on the DNS Made Easy website.