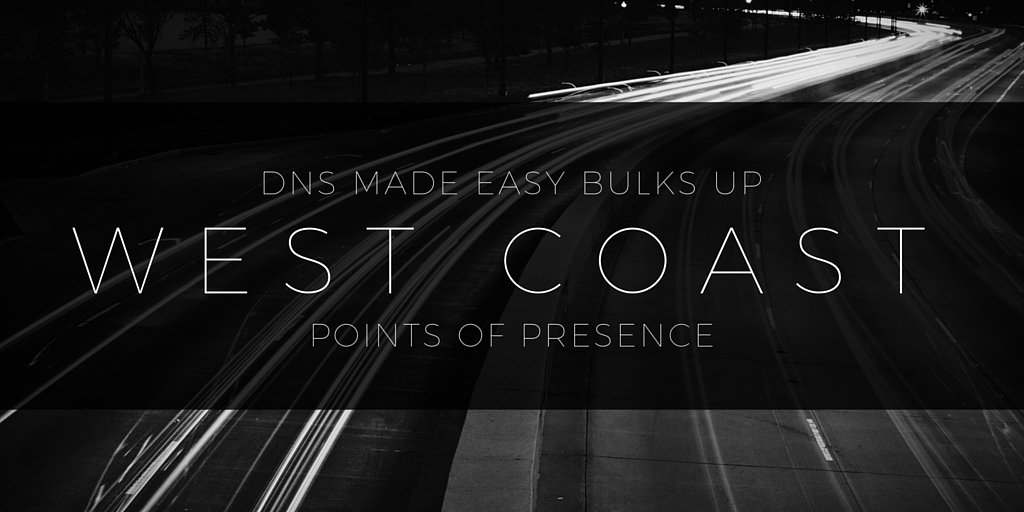 Reston, VA (PRWEB) –Engineers at DNS Made Easy are revamping and upgrading West Coast US facilities throughout September to maximize resolution speeds and add extra layers of redundancy to prepare for upcoming holiday season. As of this week Los Angeles, San Jose, and Seattle have undergone upgrades with more locations to follow in the coming weeks.

The ecommerce nightmare we all know as the holiday season is rapidly approaching. As the days tick away, companies dependent on ecommerce are seeking out the most secure and reliable providers for all their online needs. The holiday season is notorious for taking down some of the largest and most secure websites either from DDoS attacks or just out of pure volume of customers trying to access their sites. This is because many companies are too busy focusing on their front end concerns and they forget about the backbone of their website, DNS services. DNS Made Easy is bulking up for the season, adding even more layers of security to our Points of Presence (PoP) on the West Coast.

“Uptime and reliability should be a guarantee, not a concern,” says President of DNS Made Easy Steven Job.

As part of their continued effort to maintain their 13 year 100% uptime record, Job and his team of engineers are increasing security and bandwidth at West Coast PoP’s. Beginning at the Los Angeles facility in August, DNS Made Easy engineers installed additional bandwidth and server capacity to increase network speeds and security. Upgrades went smoothly and prompted the team to begin similar upgrades to the rest of the West Coast PoP’s at their San Jose and Seattle locations which were completed last week. Facilities at Singapore and Amsterdam will follow suit in the coming weeks.

While the holiday season may seem far away, there is always the constant threat of DDoS particularly targeting US name servers. According to a recent report, DDoS attacks are growing with the majority of attacks targeting the United States and originating from China. Now more than ever, West Coast name servers need to be running at peak speeds and be able to handle massive loads in the event of an attack. The best way to prepare is to seek out an outsourced DNS provider who will provide users with the reliability and security only a managed DNS service can guarantee.

DNS Made Easy is a subsidiary of Tiggee LLC, and is a world leader in providing global IP Anycast+ enterprise DNS services. DNS Made Easy implemented the industry’s first triple independent Anycast cloud architecture for maximum DNS speed and DNS redundancy. Originally launched in 2002, DNS Made Easy’s services have grown to manage hundreds of thousands of customer domains receiving more than 15 billion queries per day. Today, DNS Made Easy builds on a proud history of uptime and is the preferred DNS hosting choice for most major brands, especially companies that compare price and performance of enterprise IP Anycast alternatives.