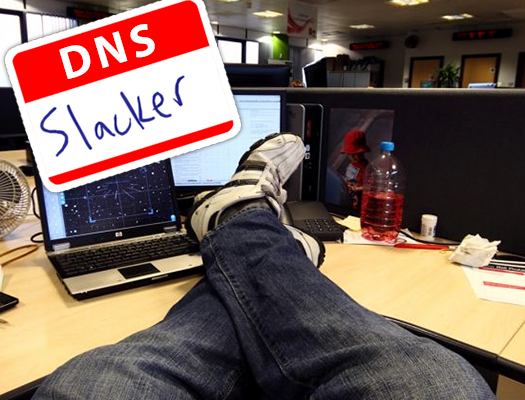 What it’s all about and why some companies haven’t embraced it.

Let us give you a glimpse into life without DNS security, shall we?

Your company’s website operates thanks to an Internet infrastructure, a robust network of IP addresses and their respective protocols. DNS allows domain names to be translated into these IP addresses. For the infrastructure to perform at its best, it needs to be secure. “Not so fast!”, says a persistent series of security threats.

Sometimes these threats pop up as a result of cache poisoning and other harmful acts against DNS. When this happens, the authenticity and accuracy of data within DNS is in question and compromises the infrastructure’s speed and performance—not good for business!

To combat these attacks, DNS Made Easy constantly upgrades its network so these security threats can be put to bed. Simply put, DNS security is a big deal.

So why haven’t all businesses embraced it? You might be a (gulp) DNS slacker. We typically see five types:

Poor DNS—a behind-the-scenes hero with so much responsibility. The average consumer or business may not realize its importance in keeping your company running online and at top speed.  According to a survey commissioned by Public Interest Registry (PIR) – it was ultimately revealed that across the board there is a lack of understanding about DDoS attacks despite their increasing frequency.  Moreover, only 17 percent could correctly identify what the acronym DDoS stood for with 77 percent admitting that they had no idea.

The Do It Yourself

This is the simplest and least effective method.  Someone writes some Python scripts that try to filter out the bad traffic or an enterprise will try and use its existing firewalls to block the traffic.  Back in the early 2000s, when attacks were pretty simple, this could work. But these days, attacks are far too large and complex for this type of protection.  A firewall will melt quite quickly under the load of even a trivial attack.

You may feel your business is well protected, at least against the DDoS attacks that are known to have occurred. As a result, you think your online performance will continue to truck along just fine.  You do nothing to protect your business against the takedown threat despite their increasing frequency.

Just like your computer, phone or tablet, DNS is not immune to viruses or security attacks. But as a skeptic, you may think DNS security in unnecessary and that its automated processes don’t need protection.

If you think DNS services are expensive—well, you wouldn’t be entirely wrong. But not with DNS Made Easy. Our services cost a fraction of our competitors’. Plus, we offer many capabilities that the other guys don’t. See for yourselves.

Without DNS security, your Internet usage (emailing, watching videos, reading articles, shopping online) would be downright frustrating and potentially impossible. Believe in the power of DNS—contact us today.