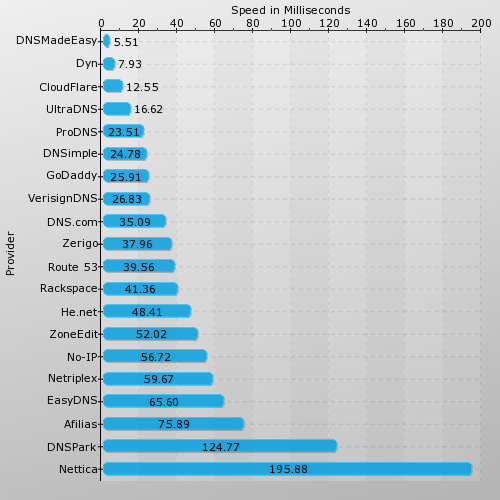 SolveDNS, a third party network research firm, said DNS Made Easy provides the fastest network speeds in the industry for the month of December, 2013.

For three months in a row, DNS Made Easy, the leading provider of enterprise IP Anycast Managed DNS services, was named the fastest network provider for speed across the United States. In the past six months, DNS Made Easy has been in the top three, climbing from third to first place, with our closest competitor a half second behind our average speed.

DNS Made Easy invests 89% of all revenue in hardware, colocation, bandwidth, and DDoS mitigation-related services. This investment is vastly different form normal industry practices where sales commissions and other associated marketing costs generally account for a major percentage of where companies apply their revenue.

DNS Made Easy duplicated the top speed for the fastest DNS provider, repeating the exceptional service in December in 2013.

“We remain the top in the industry for speed, because of the time, knowledge, and financial investment we put into our equipment and infrastructure,” said Steven Job, president of DNS Made Easy. “I am pleased to see these results, because the difference between our speed and the competitor who comes in at second place is quite dramatic. DNS Made Easy is two-to-three times faster than competing DNS services that charge exponentially more for speed.”

Tiggee the parent company of DNS Made Easy, published a recent study that shows the importance of speed in e-commerce. The study cites Google, Yahoo! and Amazon research findings that one tenth of a second can make the difference between a customer who clicks off the site or continues to browse.

Speed also translates into Search Engine Optimization (SEO) returns. Google and other search engines rank websites based on speed in which DNS resolution plays a large role. The better SEO return, the more likely the site is to appear in the first page or on the top result of a search result. A site ranked in the #1 spot in a search result can usually expect 8.5 times as much traffic as a website that is ranked in the 5th spot on the first page.

“We are so competitive when it comes to speed and performance that we often find we are competing with ourselves and our own times,” Job said. “DNS Made Easy has been defining a new standard in uptime and performance for 12 years.”

DNS Made Easy will continue infrastructure improvements throughout 2014 aimed at further network optimization. Customers can expect to see major improvements in Asia-based regions as well as on the West Coast in the United States. New network locations are also planned in 2014 following the deployment of Sydney, Australia; a much anticipated launch that took place at the end of 2013.

DNS Made Easy is a subsidiary of Tiggee LLC, and is a world leader in providing global IP Anycast enterprise DNS services. DNS Made Easy implemented the industry’s first triple independent Anycast cloud architecture for maximum DNS speed and DNS redundancy. Originally launched in 2002, DNS Made Easy’s services have grown to manage hundreds of thousands of customer domains receiving more than 8.0 billion queries per day. Today, DNS Made Easy builds on a proud history of uptime and is the preferred DNS hosting choice for most major brands, especially companies that compare price and performance of enterprise IP Anycast alternatives.