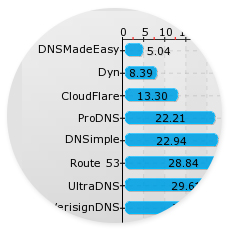 Speed: it’s what kills – the competition.

DNS Made Easy ranks #1 in the world in DNS lookup speed and #1 in uptime.

Solve DNS, a third party network research firm, said DNS Made Easy provides the fastest network speeds in the industry – across the nation – for the month of May. DNS Made Easy not only ranks number one for speed, but we are also number one in uptime.

Simply said: speed matters. The job of a DNS server is to translate domain names (http://www.example.com) into IP addresses (10.0.0.0.1). The DNS server does this for every new site visited in the browser. This means, no matter how fast an Internet connection speed is, a site won’t load unless the DNS server has performed the lookup successfully.

“I am pleased to see these results month after month, because the difference between our speed and the competitor who comes in at second place is quite dramatic,” said Steven Job, president of DNS Made Easy, which has a 13-year leading up time, the best in the industry. “DNS Made Easy is two-to-three times faster than competing DNS services that charge exponentially more for speed.”

DNS is critical component of online media, which is why it is important to monitor and optimize DNS to ensure user satisfaction. Network speeds are mission-critical in providing fast resolution times for customer domains.

“We are so aggressive when it comes to speed and performance,” Job said, “we end up competing with ourselves and our own times.”

Low latency applications, such as DNS are typically where delays occur in processing data. That’s why DNS Made Easy invests in network infrastructure, which provides the extra edge over the competition in terms of performance and speed.

Currently, DNS Made Easy is handling 8 billion queries a day and is expecting to exceed an average daily query volume of 13 billion within the next 18 months.

“We put a considerable amount of investment into our infrastructure and equipment,” Job said. “This is one of the main reasons DNS Made Easy remains at the top in the industry for speed.”