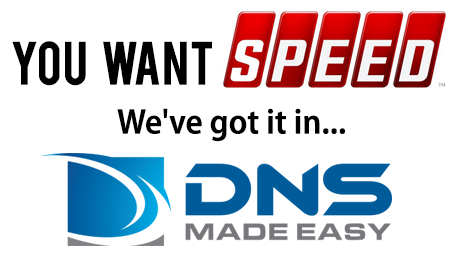 Customers who use DNS Made Easy have access to the fastest network in the industry.

In a world where every second counts, wasting time on slow Domain Name Service (DNS) providers can translate into sluggish growth and affect the bottom line.

DNS Made Easy consistently ranks as the number one provider for the fastest DNS speed in the industry, according to SolveDNS, a third party network research firm.

DNS Made Easy kicked off 2014 with an average speed of 5.04 milliseconds, which was 3.3 milliseconds ahead (about 40% quicker) of the closest competition. The company strives to stay ahead of the competition by constantly working to increase speed.

June was no exception. DNS Made Easy had an average speed of 6.09, and the closest competitor was 1.32 milliseconds behind.

“These small increments of time add up,” said Steven Job, president of DNS Made Easy. “While it might not seem like a long time, in website download time, those are precious moments to keep a customer or lose them. We are very proud of our network dominance and we continually prove that we can offer a superior DNS service at the highest ROI in the industry. DNS Made Easy continually outperforms other enterprise DNS services that are often 100 to 1,000 times their pricing.”

The purpose of a DNS server is to translate domain names (http://www.example.com) into IP addresses (10.0.0.0.1). The DNS server does this for every new site you visit in the browser. This means, no matter how fast your Internet connection speed is, a site won’t load unless the DNS server has performed the lookup successfully.

“Customers who use DNS Made Easy have access to the fastest network in the industry,” Job said. “We cut query resolution by more than 50%, which vastly improves SEO for those domains. This is one of the main reasons DNS Made Easy remains at the top in the industry for speed.”

“We heavily invest in our infrastructure, networks, and name server equipment,” Job said. “The rate of queries is growing, and we work to stay ahead of the curve.”

DNS Made Easy built a core IP Anycast+ routed DNS architecture built with Juniper Networks equipment that has provides clients with the leading up time in the industry for the past 13 years.

DNS Made Easy is so aggressive when it comes to speed and performance, the company often ends up competing only with itself and its own times.

DNS Made Easy remained in the top three fastest DNS services for more than two years. To recap the last six months, here are DNS Made Easy’s reported times, and the next closest competitor: